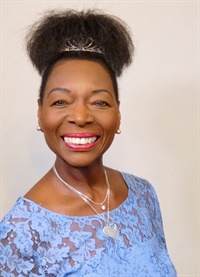 Baroness Floella Benjamin left school at 16 in 1966, with the aim of becoming Britain's first ever Black woman bank manager but realised that because of her colour her dream was unlikely to become a reality.

So she changed direction and went on to become an actress, presenter, writer, award winning independent producer, politician and an active advocate for the wellbeing, care and education of children throughout the world.

This year she celebrates 51 years in show business and has appeared on stage, film and television, working with some Britain’s top drama directors.  She is best known for her in the iconic children’s programmes Playschool and Playaway. She has written over 30 books and the latest edition of Coming to England is now a number one best seller and is used as a cross-curricular resource in schools and teacher training colleges across the UK. Her creative work has been recognised with a BAFTA and the JM Barrie Award for her lasting legacy to children’s creative arts.

From 2006 to 2016 she was Chancellor of the University of Exeter, the first Black woman Chancellor in the UK. In 2010 she was elevated into the House of Lords, where speaks on children's, diversity and media issues. In 2019 she was awarded a ‘Lifetime Achievement Award’ by the Women in Film & Television and in 2020 was made a Dame of the British Empire. She was made an Honorary Freeman of the City of London in 2018 for her contribution to the City of London and this year made history by becoming the first Honorary Freeman of the Worshipful Company of Educators.

She currently chairs the Windrush Commemoration Committee, set up by the Government to commission a lasting monument to the Windrush Generation in central London.